Hagia Sophia is mostly known as one of the most valuable and fascinating structures in the world of art and architecture. It deserves to enter to the collection of the rare works by challenging to the time. It is located in Sultanahmet area (a historic place), nearby of Topkapi palace in Istanbul Turkey. Hagia Sophia is a great architectural beauty and an important monument both for Byzantine and for Ottoman Empires. Once a church, later a mosque, and now a museum at the Turkish Republic, Hagia Sophia has always been the valuable of its time.This church was rebuilt three times on the same place. Megale ekklesia meaning big church was named firstly but then it was renamed as Hagia Sophia meaning Holy Wisdom.

The first church was constructed by Emperor Constantius II (337-361), son of Emperor Constantine I. This church was a wooden-roofed basilica with a nave flanked by two or four aisles, each carrying a gallery storey. It was preceded by an atrium. This church was largely burned down in 404 during riots since patriarch John Chrysostom was sent into exile by the Emperor Arcadius. Today, some marble blocks from this second church are represented at the courtyard of the third church/ the museum. 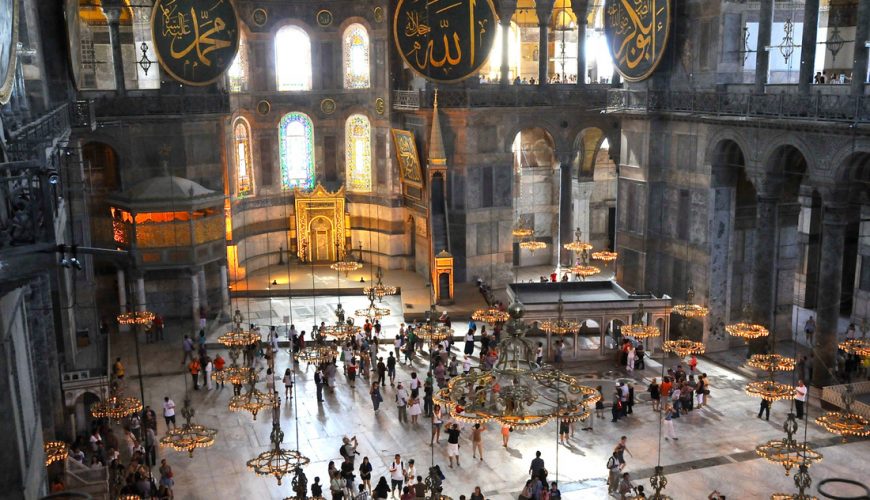 The second church was built by architect Ruffinos Emperor Theodosios II. order in 415.This church was also constructed as basilica and its root was made from wood.It had 5 naves, 3 gates and a monumental entrance. After the riots called Nika Revolt against The Emperor Justinian I (527-565),the second Hagia Sophia was burned down in 532.

The current Hagia Sophia was built by the Greek scientists Isidore being physicist , and Anthemius being mathematician , Emperor Justinian’s reguest. It is one of the greatest relics examples of Byzantine architecture, rich with mosaics and marble pillars and coverings. Many materials had been brought from all over the empire, including yellow stone from Syria, porphyry(red marble) from Egypt and Hellenic Columns from the Artemis Temple in Ephesus. To construct this build,more than ten thousand people were worked and the third church was showed by the emperor in 537. 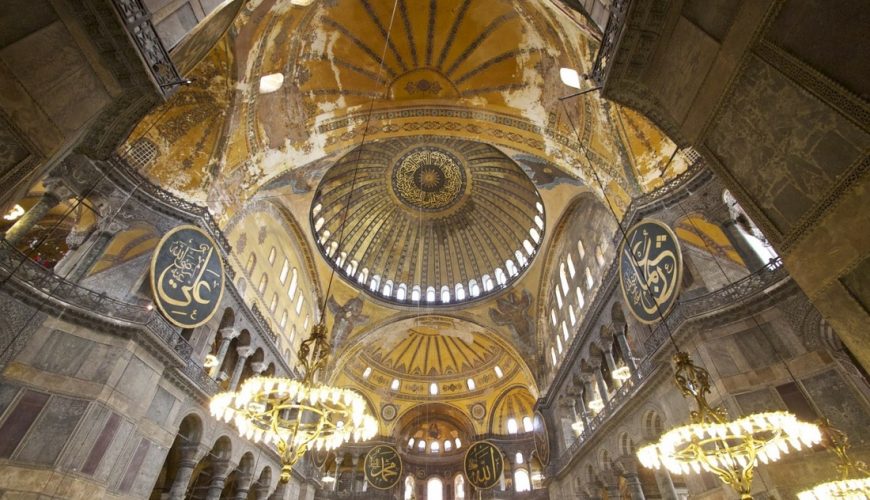 The mosaics were finished later on, at the time of Justin II (565-578). Hagia Sophia was converted into a mosque, after the conquest of İstanbul in 1453 by Sultan Mehmed II the Conqueror (Fatih). Hagia Sophia served as the main mosque of Istanbul for nearly 500 years. It became a sample for many of the Ottoman mosques of Istanbul like the Beyazıt Mosque, the Kalender Mosque, the Suleiman Mosque, and the Eyup Sultan Mosque. In the 16th and 17th centuries, the minbar, the mihrab, throne for sermon reflecting Islam and wood bars were put in to the interior section. A library was built by the order of Sultan Mahmud I.

The Hürrem Sultan Hamam (Turkish bath of the Ayasofya mosque complex), on the southwest side of Ayasofya next to the park with the fountain, was designed by master architect Mimar Sinan and built for Sultan Süleyman the Magnificent. It has been beautifully restored and is again in service as a hamam (Turkish bath). 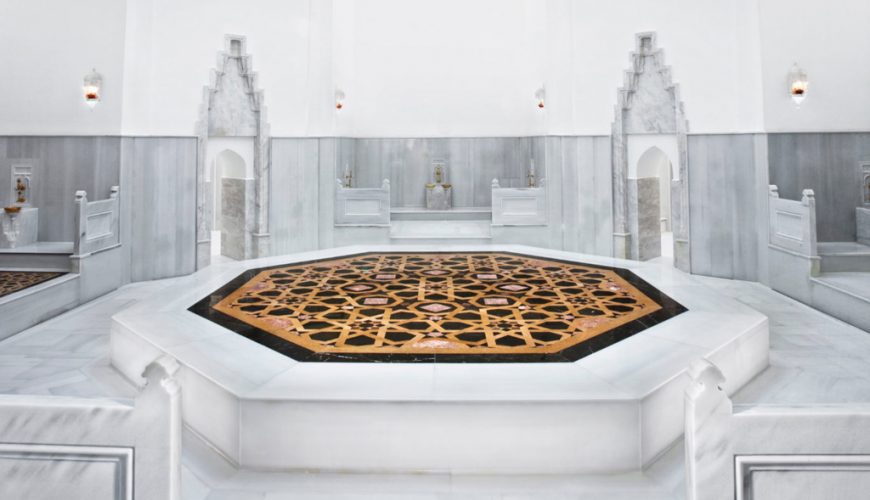 Hagia Sofia was modernized and turned into the Ayasofya Museum In 1934, at Turkish president Kemal Atatürk’s request. The prayer rugs were removed, displaying the marble beneath, but the mosaics remained largely plastered over and the building was allowed to decay for some time. Some of the calligraphic panels were sent to other mosques, but eight roundels were left and can still be seen today.

Within Hagia Sophia there is a sweating column in the corner of the church. This column’s lower part is encircled by a bronze belt and there is a hole to insert a finger. There are many legends and stories about the column. In the northern wing there is a mosaic panel, and there are three panels, each with groups of three figures, in the southern wing.

A masterpiece of Byzantine mosaic art is illuminated by the light from a window in the southern gallery . The panel, called “Deesis”, represents the last judgment and is a composition of three figures: Jesus is seen in the center, flanked by the Virgin Mary and John the Baptist. The unusual arrangement of the mosaics in the background highlights the beauty of the figures, and the facial expressions are extremely realistic.

The Virgin Mary and Christ-Child, the Emperor Comnenus II, and the Empress Eirene is depicted at the end of the southern gallery a panel from the 12th century while the panel on the side wall portrays the ailing Prince Alexius.

UNESCO accepts Hagia Sophia as The World Heritage because of architectural beauty.